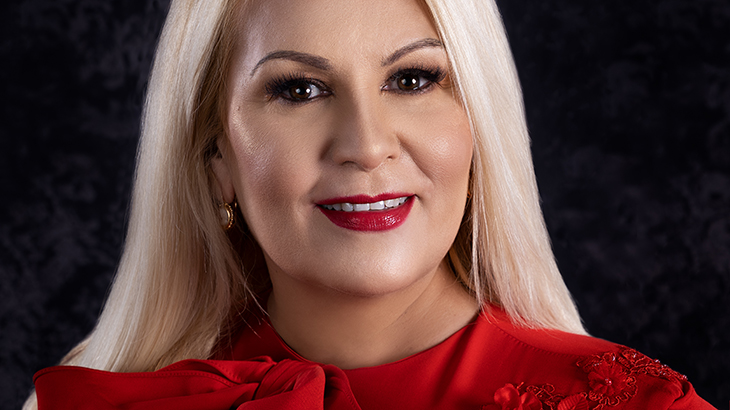 She was born Maria Odalys Marino Gonzalez on July 14, 1962, in Las Tunas Cuba, her father Ramon an auto mechanic, her mother Noraida, a homemaker. Odalys as all her family and friends called her, was introduced to the world of fashion and clothing design by her mother. While growing up in Las Tunas, Odalys mother Noraida (Nory, to her family and friends), would take to fabric and create clothing for not only Odalys, but her nieces and cousins as well, using a foot pedal operated singer sewing machine.

Odalys completed her education and earned her master’s degree in Economics at the University of Las Tunas, Cuba. Working in the banking industry, until a life altering decision was made, to emigrate to the United States with her 2 teenage twin sons.

Upon arriving in her adopted country, Odalys and her sons settled in New Jersey. As a single mother, Odalys provided and loving environment, but made sure her sons not only graduated high school AND college, but each also graduated with a 4-year degree, as Odalys obtained her cosmetology license.

Odalys continued with talents as a hair and makeup stylist to become in demand by local television and beauty pageants in New York. Her innate sense for fashion blossomed when she began designing fashions for herself and close friends. Odalys always found the time, managing busy schedule between work/family balance to stay up to speed on the latest fashion trends, while from time to time to sketch her ideas on her vision of the latest fashions.

While a new arrival in Tampa, Florida, As Odalys was a true entrepreneur, she started and grew several successful businesses.

A meeting with organizers of a charity event for children, a runway fashion show, in which Odalys had featured some 30 different looks. With a large crowd at the event offering cheers and adulation.

It was after the charity event, something had clicked in her mind, she knew she had to continue with fashion design. Odalys is known for her inclusive personal style and for dressing various celebrities and public figures in the Latin Market. Odalys decided to venture into building her emerging fashion empire. Odalys honors her mother through her boutique, Nory’s Design Boutique, in Tampa, Florida.

Her couture collections have created a huge buzz internationally, she started to receive numerous invitations to showcase her personal couture style throughout the world. After showcasing collections in Miami and New York, Odalys felt she was ready for the world stage. In the fall of 2019, collections were premiered in London, Paris, Milan, and Monaco.

As the global pandemic decreased in summer of 2021, Odalys was invited to attend and fulfill a dream of a red-carpet presentation and runway at the Cannes Film Festival. The invitations for fashion events continue to arrive from Thailand, Columbia, Dominican Republic, Miami, and Milan.

Closer to home, Marquis’ Who’s Who organization selected Odalys to be included 2020-2021 edition.

In 2021, the selection committee for the Tacarigua De Oro International presented Odalys with Fashion Designer of the year for 2021.

In August, the Tampa Bay Times, published a feature on Odalys, that was published on August 10, 2021,edition.

October of 2021, The Orion Star Awards, presented Odalys with the Fashion Designer of the Year in Dubai, UAE, with an additional honor of Odalys presenting her latest collection “Fashion in the Sand”, to a standing ovation, from the star-studded audience.

Of all of the awards and accolades Odalys has received, her mind will recall a conversation of so many with her mother Noraida, reminding Odalys to never stop studying and learning that is something that “NO ONE” can ever take away from you, and never stop creating.